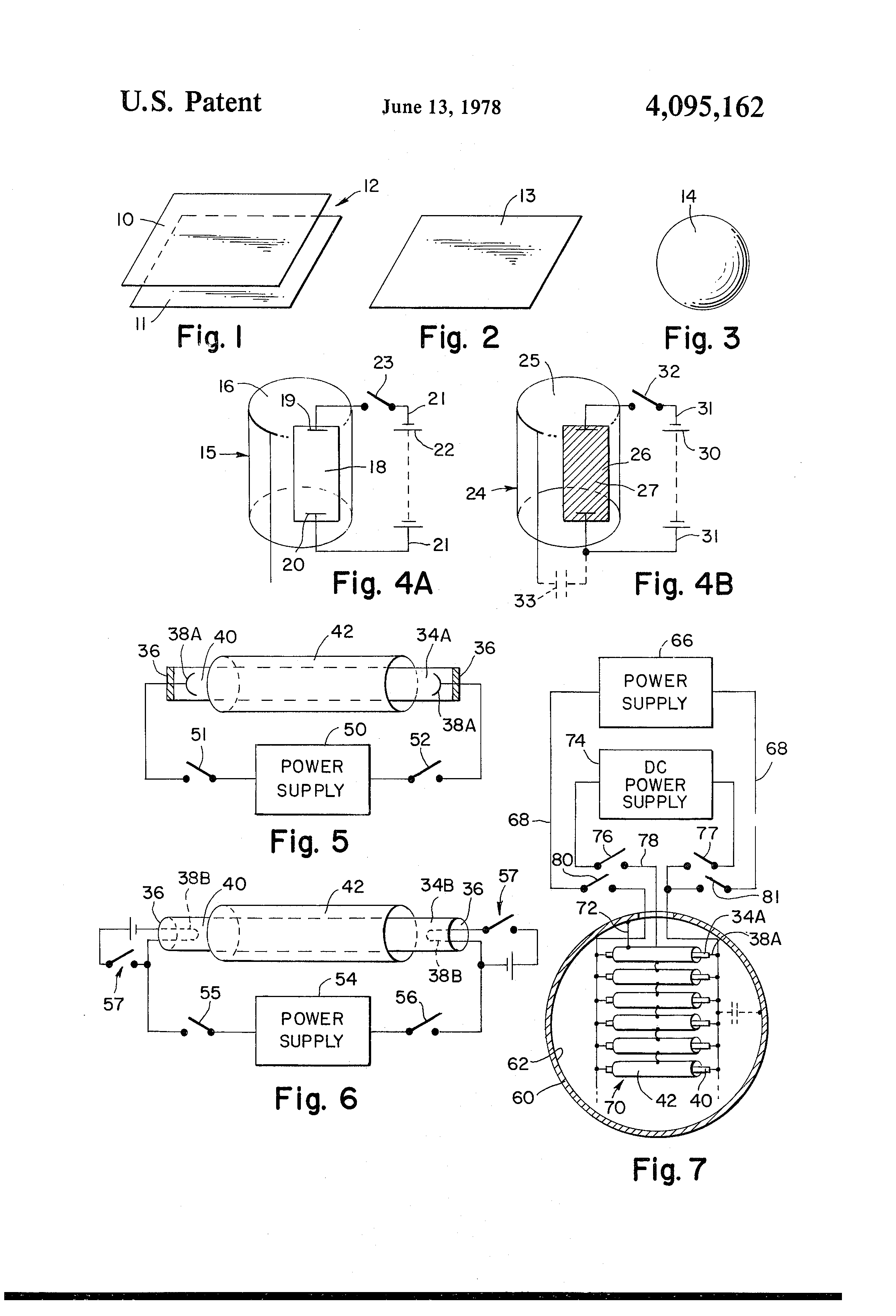 SUMMARY OF THE INVENTION

An object of the present invention is to provide a capacity changer and its construction whereby there is achieved a change in capacity occurring in changing a small-value 1-terminal capacitor into a substantial value 2-terminal capacitor, and vice versa.

Another object of the invention is to provide the means for producing high potentials which can be positive or negative in nature and which are adapted for use in the study of nuclear structure and nuclear reactions.

Still a further object of the invention is to provide a novel and improved means for constuction [sic] and operation of a high power particle generator.

Another object of the invention is to provide a novel and improved device for generating potentials of either positive or negative nature of such magnitudes so as to attract, bend or repulse radiation.

Still another object of the invention is to provide novel and improved construction of a device for generation of potentials of either positive or negative nature, to attract or repulse mass.

A further object of the present invention is to provide novel and improved means and its construction for making an inexpensive, yet effective Intense Neutron Generator with possibility for slow to fast neutrom emission.

Still a further object of the present invention is to provide a novel and improved construction of a high power Radio Frequency Transmitter.

Another object of the present invention is to provide the means to generate strong electrical field which can be used to counteract other electrical fields or in conjunction with suitable electronic circuitry to detect interruption of said fields by the infiltration of foreign metal bodies, ore bodies, etc. These fields can be extended to several miles and are not affected by hot and cold layers of water.

Still another object of the present invention is to provide a novel and improved means which makes the generation of super high potentials possible, without having to resort to insulators that would be prohibitive in size or cost.

BRIEF DESCRIPTION OF THE DRAWINGS The above and other objects, features and advantages of the present invention will become apparent from the following description of the drawings, wherein:

FIG 1 shows a simple capacitor consisting of two conducting plates which are separated by a dielectric;

FIG. 3 depicts a 1-terminal capacitor consisting of a conducting sphere;

FIG. 4A is a schematic circuit diagram showing the capacity changing circuit arrangement consisting of a 1-terminal capacitor and including a non-conducting gaseous discharge tube;

FIG. 4B is a schematic circuit diagram somewhat similar to FIG. 4A showing the realization of a 2-terminal capacitor including a gaseous discharge tube which is conducting, and in which the ionized gas acts as the second "plate";

FIG. 5 shows a schematic circuit diagram of a device drawn as a glow-discharge device using a power supply;

FIG. 6 is a schematic circuit diagram similar to FIG. 5 but showing a filament type version; and

FIG. 7 is an elevational and schematic view of a composite arrangement including several of the tubes shown in FIGS. 5 and 6 mounted inside a hollow metal sphere, with related power supply sources.

BACKGROUND OF THE INVENTION

In the past, the changing of 2-terminal capacitors to 1-terminal capacitors have been regarded largely as theoretical problems and devices. As for generators of high potentials, (in excess of 10 MeV), positive, negative or alternating in nature, they have been seen to be costly, cumersom and to need a fair amount of insulation.

The present invention seeks to provide means and construction for attaining the foreging objects at relatively low cost and with good expectation of rewarding results.

DETAILED DESCRIPTION OF THE PREFERRED EMBODIMENT

In order to understand clearly the nature of the present invention, and the best means for carrying it out, reference may be had to be the drawings in which like numerals denote similar parts throughout the several views.

FIG. 1 shows a simple capacitor consisting of two conducting plates 10 and 11 which are separated by a dielectric medium 12 which may be air or other insulating medium. On the other hand, there is shown in FIG. 2 a 1-terminal capacitor 13 which consists of only the single flat conducting plate 13.

As shown in FIG. 3, there is depicted another type of 1-terminal capacitor 14 consisting solely of a hollow sphere 14.

In FIG. 4A, the schematic circuit diagram shows the capacity changing circuit consisting of a 1-terminal capacitor 15 consisting of a plate 16 which may be cylindrical in shape, and encloses or goes around a non-conducting gaseous discharge tube 18 made of sealed glass or the like material, with electrodes 19 and 20 inside the tube, and which is connected via lead wires 21 to a battery 22 through a switch 23.

In FIG. 4B, the schematic circuit diagram shows the realization of a 2-terminal capacitor 24 consisting of a plate 25 which may be cylindrical in shape which goes around a gaseous discharge tube 26 which is conducting. The ionized gas 27 within the tube 26 acts as the second plate under the influence of the voltagee from battery 30 delivered via lead wires 31 through the switch 32. The capacitance is indicated by the broken lines 33.

As seen in FIGS. 5, 6 and 7, the basic capacitor of the present invention consists of one or more hollow tubes 34, 34A or 34B, which may be round, cylindrical or any other shape and made of non-conducting material such as glass. All of the tubes have end walls 36 at each end thereof and electrode terminals 38A or 38B are inserted through the sealed glass ends. The tubes are evacuated of air and filled with an ionizable gas 40 such as neon or argon, under suitable pressure. The tubes are partly covered with a conducting substance or coating 42, leaving the electrode terminals 38A and 38B free and insulated from the substance 42. The outside surface of each of the tubes 34, 34A and 34B are now for our purposes substance 42, which is a 1-terminal capacitor.

I have found that is is commercially advantageous to use a tube which does not have a phosphor coating, but which is otherwise similar to those used in the lighting industry. This type of tube, shown in FIG. 6, has heated filament-like terminals which make it possible to construct a high speed or fast-firing glow discharge circuit with a lower firing potential.

Thus, FIG. 5 shows the tube 34A drawn as a glow discharge device, using power supply 50, switches 51 and 52 and electrode terminals 38A. FIG. 6 shows the similar arrangement but with tube 34B connected to the power supply 54, including switches 55 and 56 and starters 57 at each end as is known in fluorescent lamp art.

Looking at FIG. 7, there is shown a hollow metal sphere 60 with a spherical chamber 62, with a number of tubes like those shown at 34A and 42 in FIG. 5 or at 34B and 42 in FIG. 6 inside the chamber 62. The sphere 60 acts also as a 1-terminal capacitor, having its own capacity (C equals 0.556 d) and C is the capacity of pF, and d is the diameter of the conducting sphere in centimeters. Even if each tube 34 has its conducting surface 42 connected to sphere 60, the capacity of the sphere remains the same, namely (C equals 0.556d).

If the gas 40 inside the tubes 34A or 34B is ionized by an ac or dc power supply 66 through wires 68 and the switches shown in FIG. 7, and electrode terminals 38A and 38B as seen in FIGS. 5 and 6, a 2-terminal capacitor is formed herein called capacitor 70. Ionized gas 40 in each tube forms one plate and the conducting surface 42 forms the second plate. The glass tubes 34A or 34B are the dielectric.

Instead of mounting the tubes 34A or 34B in a sphere, they can be mounted in any other type of container with a conducting surface connected to the coating substance 42 by a wire 72 as shown in FIG. 7. However, for some purposes described herein, a sphere is the most efficient form.

The 2-terminal capacitor array 70 can be charged by a direct current power supply 74, via switches 76 and 77 and conductors connected to the electrodes 38A or 38B on the ends of the tubes 34 on one side, and another conductor 78 going to the conducting coating substance 42 on each tube. Whether ionized gas 40 forming one plate of the capacitor or conducting coating substance 42 connected to sphere 60 as the other plate becomes positive or negative depends on the connection of power supply 74. Versatility can be achieved by using three-position switches or relays for switching at 76 and 77 of FIG. 7.

The plate formed by ionized gas 40 in each tube can now be removed by disconnecting power supply 66 via switches 80 or 81 or both. When using a filament-type tube 34B as in FIG. 6, it is advisable to disconnect the filament-heating power supplies via starter switches 57 or both.

When fast action is required in the changing to state from 2- or 1-terminal capacitor operation, the gas 40 can have quenching type additives as known in the art. The charge on the other plate (sphere 60 connected to conductors 42) remains. If capacitor 70 (2-terminal capacitor array) had a capacity of 10 microfarads (which can be attained by using a sufficient number of the tubes 34-42) and was charged up to 10,000 volts, the charge would be 1/10 Coulom (Q equals CV). If the capacity of the sphere 60 was, for example 100 pF (picofarads), the potential which is generated is momentarily about 100 million volts.

It is thus seen that the invention furnishes solutions to various problems as mentioned above, and at reasonable cost of equipment and power supply.

Although the invention has been described in specific terms, it will be apparent to those skilled in the art that there are many modifications, changes and improvements which may be made therein without departing from the spirit and scope of the invention as herein claimed. Further, if desired, the switching arrangements at 76, 77, 80 and 81 of FIG. 7 may be mounted inside the sphere 60, if convenient.

What is claimed is